Spring is peeking through

It's still mostly brown here, but there are tiny hopefuly signs. And some bizarre things, as befits a good photo-walk.
Posted by Leah at 10:19 pm No comments:

After a jittery morning, after lots of interviews over the last few weeks, after some strained and stressful resume editing and cover-letter compiling... I have a co-op job for the summer! I didn't expect to get this particular one, but I'm excited about it. I think I'll learn a lot, and as terrible as it sounds, I'm anxious to leave town. Not so enamoured with London, ON.

It's all contingent on marks, though, so the pressure is on. This one paper gets my nearly undivided attention for the next while, and Strunk & White once more becomes my bedtime reading.
Posted by Leah at 12:54 am No comments: A hat just in time for spring.

Pattern: Wesley by Kate Gagnon
It turned out a lot smaller than I thought it would, but then again I didn't swatch, used larger needles out of laziness (5.5 mm instead of 5, since I don't own a short enough 5 mm circular), and basically screwed around with the details enough that I'm surprised it looks at all like the original! In truth I followed the instructions, mostly.

Mods: I attempted to make a hybrid of size one and size two, hoping for something not slouchy, but big enough around to fit my head. I cast on for size two, and intended to do only two repeats of the colour pattern, but when I got to that point it still looked short, so I did another two colours. (2.75 repeats?). I also screwed up the decreases, and basically ended up winging them. It turned out a little lumpy as a result, but blocking mostly helped. I am aware I made some stitch pattern mistakes as well, but I like the random element!

Still not entirely sold on me and berets, but I wore it in public tonight (too warm during the day), and people were encouraging. Anyway, it doesn't matter that I don't know if berets are for me, since I'll totally keep making them. I'm itching to make Selbu Modern, like everyone else in the world. And also Opus Spicatum. (And other ones not from Kelbourne Woolens, but you know. Might as well keep going.)
Posted by Leah at 2:19 am 1 comment:

And I want to work for them this summer...

In February, at the urging of the graduate student society, I did something I've never done before.

That's right, I emailed the prime minister. Ha! As if that's going to do any good, but I thought I might as well exercise my civic right in these troubled times.

I wrote an eloquent (ha!) email voicing my concerns over provisions for $87mil towards graduate scholarhips in the budget of which the extra 20% allocated for Social Science and Humanities grants would go entirely to business students. Outrageous! More business students sitting around arguing about the economy will not improve it, I say! Anyway, I sent off the email, and received a reply a week or perhaps more later from an aide saying my concerns had been forwarded to the minister in charge of the portfolio. They said it was Diane Finley, Minister of Human Resources Development etc etc whatever they call it these days, and I paid it no more attention.

Today I received an email from this particular minister's office saying that my concerns about scholarship money had been forwarded once more, this time to Tony Clement, the Industry Minister, and apparently the one who is actually responsible for the portfolio.

It appears nobody is quite sure who is doing what in this government. I certainly had no clue SSHRC fell under Industry until I looked it up today after receiving that unexpected email. Turns out Diane Finley's aides have some idea of what's going on, thought it's not clear why they sat on it for a month. I can only hope they had to sort through a deluge of concerned emails about Canadian Graduate Scholarships that got mistakenly sent to them by some loser in the PM's office.

Actually, I don't hope that. Not that it would do any good, since the budget passed and is rushing through all levels without much modification.

But my little voice got stalled in the ether for over a month due to the PMO's total incompetence. Help, help I'm being oppressed! I almost think it must have been intentional - misdirect the complaint and claim it never happened. ;)
Posted by Leah at 2:21 am No comments:

It's my blogaversary! That is a very awkward word. Nevertheless, I've been at this in this particular forum for a year (not counting the one post in 2002 I made before forgetting this blog even existed.) In my head I had a new shiny less-awkward blog layout by today and all that - but in reality I haven't even started, so that may have to wait until term finishes or I feel like procrastinating even more. (LSCH assignment... it's coming. Sigh.)

In the meantime, industry!

It is a goal of mine to get better at photographing food. And other things, but I'm going to make a concerted effort here.

Social baking is fun. I went to a friend's house today and we made cookies with marshmellow fondant icing. Sugariest thing ever? Very possibly. It was fun, and also colourful. Possibly too colourful.

Now I'm equiped for another crazy week of assignments at FIMS.
Posted by Leah at 11:10 pm 1 comment:

I'm making Wesley. It's sunny and lovely outside, not at all winter-y... but who knows, maybe I'll get some use out of this hat before winter is really over. Not this week, though.

I'm excited to say that these sunny, washed out photos are brought to you by ACTUAL LIGHT IN MY BASEMENT ROOM. Woo! I'll work on less shiny photos at some point.
Posted by Leah at 7:17 pm No comments: Yarn: Berroco Comfort
Mods:
-long sleeves roughly following emcglone's instructions
-two more decrease rounds at the neck
-knit neckband picking up stitches in both directions every 5 or so rows, hedging between the pattern as written and how many people have modified it.

Please excuse the requisite dirty mirror shot. My self-timer and I are having a disagreement. I can't seem to get it to focus on me when I use it, since I have to press the shutter before I'm in place, so it focuses on something else. Any suggestions?

I am so glad to be finished this. I started it in November and planned to have it done by December. Woops. That said, if I was a proper perfectionist I'd rip out the neck again (for a fourth time) and redo it so it doesn't look so weird. The extra decreases I did left an oddly textured bit that is clearly visible in the photos. I'll wear it anyway, though. It's pretty cozy for an entirely synthetic fibre.

Speaking of which, this was a major experiment for me. I'd like to say I only use natural fibre yarn, but in reality I often find myself using blends of natural and synthetic fibre. Rarely do I use something entirely synthetic, but it was the colour more than anything else that attracted me to this yarn. The yarn shop I went to doesn't have a massive selection, but they have a whole wall of this stuff, and the range of colours seduced me. This sort of deep teal (despite the photos, it is in fact slightly green) is probably my favourite colour of the moment. I have no idea how this will wear, though I have read good things about it.
Posted by Leah at 10:10 pm 2 comments: Oh yeah, I went to Niagara Falls this weekend. I had never been, but I guess that's one more wonder of the natural world to cross off. It was bitterly cold, but not very crowded, and the sun peeked out! I took about a hundred photos and stood gaping for a bit.

Then we drank wine. 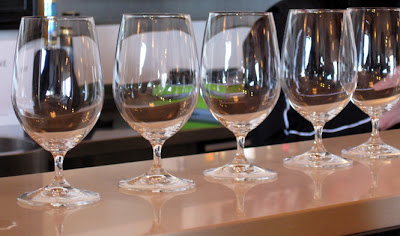 Inniskillin is a beautiful, very classy set-up. We got an introduction to wine-tasting, which was a laugh of course. I don't have a very sophisticated palate, but I can almost pick out various pretentious features of wine if someone tells me what to look for! Yay.

And then, to Kittling Ridge, which I will sum up in this ridiculous photo: 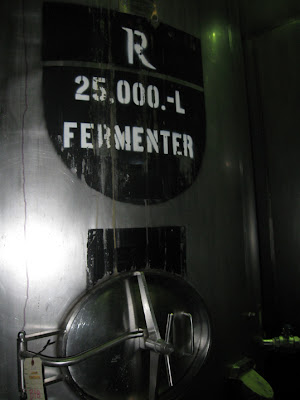