I saw this at Canary Knits, and I'm probably the last to jump on the bandwagon, but it looked like fun, so here it is.

The blog according to Wordle.

Gee, I seem to be obsessed with Ottawa.
Posted by Leah at 1:53 am No comments:

I don't know if I'm cut out for this blogging thing. No in-progress pictures of the long-suffering Tempting II? Thus remedied:

I do believe this little sweater has turned respectable! Please excuse the horrible lighting: I live in a basement. All I need now is the neckband (take two), but I was so excited that it actually fit without falling off that I had to prance around taking awkwardly posed photos of myself. Lucky for you I crop out my head.

I realized while in Ottawa how much I complain about London. It's not so bad, really! My tendency to complain about things in order to make conversation probably represents some bizarre flaw in character. I'm happy, mostly! In any case, it was fun to be back in Ottawa, and perhaps London noticed, since it has been cold and bright and not at all slushy since I returned. Cold sunny days make me smile. 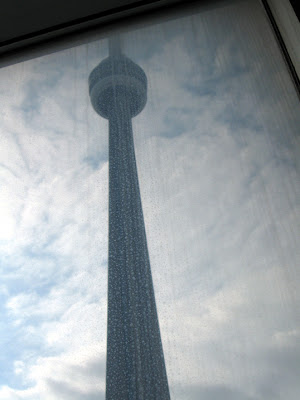 On the way home I spent 3 hours in Union Station. I present to you Toronto: View Through Dirty Glass. 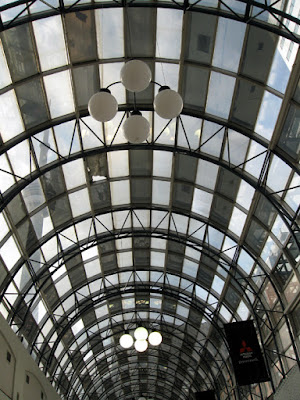 I didn't have the energy to go exploring much further afield, but one of these days I think I should. I haven't properly been to Toronto in years.

Today is my birthday. It doesn't really feel like my birthday, and I almost forgot about it because I did all my celebrating while I was in Ottawa. Several have told me that I ought to be gorging myself on pancakes, but since I did so in Ottawa, and I don't really know how to make pancakes that aren't scorched and lumpy, I figured I'd pass. Instead, last night I had a relaxing evening of laundry, knitting, Heroes, and guilt-free avoidance of work. Rejuvenating, and addictive - don't want to work today, either! But I did. Yay.
Posted by Leah at 3:05 am No comments:

Tomorrow morning early I head back to London, but I'd like to have a little more time in Ottawa. It was fun catching up with friends I hadn't been able to see before I left in January, and I enjoyed the mostly-crisp, less-smooshy weather. Unfortunately, I didn't get a chance to hit the canal, and also unfortunately, I spent the whole week freaking out about my assignments when it would have been nice to relax. They still aren't done, but I sometimes surprise myself when I work bit by bit, so I'm hoping when I look at them again tomorrow I find them mostly done, with just a little room for tweaking. Hoping against all hope...

On the knitting front, I finally FINALLY got one more ball of yarn and finished Tempting II. No pictures because I'm lazy, and the sweater is indecent. Predictably, even doing more decreases at the yoke than the pattern calls for, I ended up with a huuuuge off the shoulder neckline that is incredibly unwearable. Unless this was the 80s and I wore a high side-ponytail? Yeah, no. I haven't ripped it yet, but my next task will be to take out the neckband, and do more decreases. And MORE! I do admire the way the pattern is constructed. I think it's brilliant to do things seamlessly, and I love how the neckband is attached. I'm totally bored with this project, though, even though I gave it a month-long rest when I ran out of yarn. Sigh. I'm stagnating on Basic Black also. I desperately want to get that done while it's still winter, because I'm tired of this charcoal yarn.

Suddenly I want to knit mittens, scarves, and hats. No more sweaters!
Posted by Leah at 2:49 am No comments:

FO: Coronet, on my own head Blocking sorted out the wrinkly decreases perfectly,and the recipient likes it, so a success all around! I'm pleased. Would knit again.
Posted by Leah at 9:57 pm 1 comment:

What I did today Took a long train ride, and then another.

Knit a lot, and finished Coronet

Mods: I did a hybrid of the Medium and Large sizes. Originally intended to knit a medium (22 in circumferance), but I didn't check my gauge, and the hat band ended up being too short with the stipulated cable repeats, so I kept going. I only knit up 8.5 inches before decreasing. My decreases looked rumply and terrible, but I think blocking on a balloon has evened them out somewhat. Modeled shot to come, maybe.

It's Patons Classic, my go-to cheap yarn for hats, apparently. I keep meaning to at least try Cascade 220, which I have so far never tried, despite the fact that I'm a miser and cringe at expense. Something for the future. Anyway, I think it will be fine because it likely won't get too much wear. One of these days I'll try some luxury fibre and maybe I'll never turn back?

I have a raw spot on my hand from knitting for so long, today. I did a little bit of reading on the train, but mostly knitting. The entire stockinette portion of coronet took shape on the train today, although I had finished the band before. It's good to get something finished for once! Now that I'm home, I'll try to acquire some more yarn to finish Tempting II, and I'll be rolling. That's right, I brought 3 knitting projects home with me for reading week. What about all that reading I'm supposed to be doing?
Posted by Leah at 2:39 am No comments: I took a wander by the train station yesterday. Why are train stations always surrounded by dilapidated buildings and rust, even when they are located in the middle of town? The train station itself is pretty shiny. I find dilapidation interesting to look at, anyway. Got my train tickets, am all set for a long wait in Toronto and a train ride longer than it seems like it should be.
Posted by Leah at 1:09 am No comments:

As usual, I'm at the point where a few solid hours work would probably result in a finished product. Maybe not a brilliant finished product, but one nonetheless. And yet the thought of getting my notes out of my backpack, opening a Word document, and starting to reorganize all the crap I am tentatively calling a literature review makes me shudder. So I am blogging. (Typical.)

I spent a good solid 5 hours on the computer earlier. I got so much done today. Just a little more... Until tomorrow. And the day after. Sigh. Whine whine whine moan moan moan. Okay, I'm done. Down to work.
Posted by Leah at 2:25 am No comments: 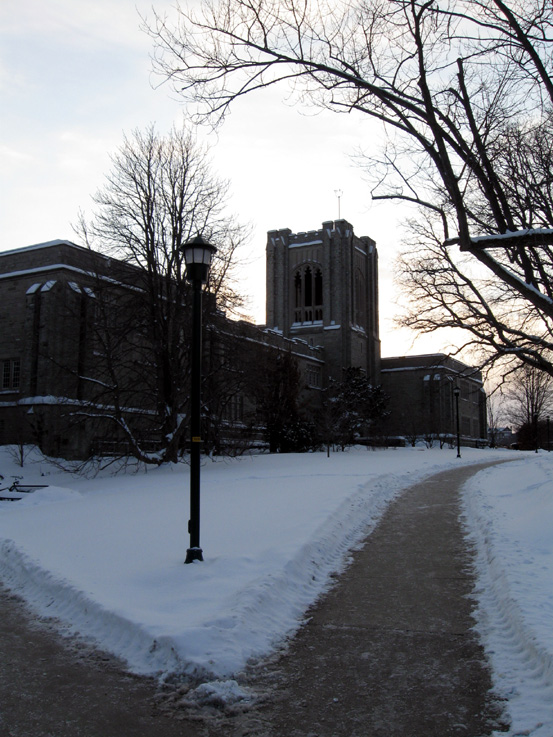 It amuses me that the engineering building looks like a church. I'm going to call it the Church of the Engineering from now on. Now for utterly unrelated ramblings...

I ought to have suspected that a general search of LIS literature relating to the internet would be interminable. Since apparently LIS is collectively obsessed with the internet. Come to think of it, most people are obsessed with the internet, but in reading these LIS studies I'm finding that there is a sense of urgency. Everyone is terrified of becoming obsolete, and yet many are clinging to traditional forms and catalogues that require some foreknowledge to use effectively.

Reading these studies is a somewhat disorienting experience, not simply because of their length (though they do make my eyes water from compuer-gazing), but also because I can see myself in their analyses of clueless undergrads engaging with the library catalogue for the first time. Honestly, I've learned more about the intricacies of effective searching in the last few weeks than in the past four years. Nobody claims Carleton had a particularly brilliant library; in fact, I believe the words normally used to describe it are something along the lines of... well, something impolite. (mumble LEARNING COMMONS?!). But I used it, and I'm pretty sure I never used a boolean operator on the catalogue the entire time I was there. Never mind truncation!(In my defense I did employ boolean operators when on the internet). I don't think we ever had an instruction session from a librarian or anything, although it's not clear if that would have helped.

I don't really have a point, other than to say that I think in undergrad I took shelter in the inadequacy of my research. It was a deliberate choice to pick JSTOR and stick to it, only reluctantly using other databases. I never once got an interlibrary loan, nor did I use any journals I could only find in print. Good thing I didn't do a thesis, right? Learning how to actually make use of the wide world of library before me is kind of terrifying, but obviously liberating. My disbelief in the extent of my own library incompetence is mitigated by my recognition that I did it on purpose. I chose to only look in easy ways, and I managed -

But now I'm left with this endless literature search of doom, and I can't fall back on these artificial limits: I feel like I have to find EVERYTHING in order to make up for my past inefficiency. When will it end? How thorough is thorough enough? Gah.
Posted by Leah at 12:45 am 2 comments: