#75 Get a haircut and donate my hair to a charity. Check.

I have considerably less hair than before, and soon it will become part of a wig for a low-income child with hair loss. I've been planning this for a while. A few years ago I decided to grow my hair as long as I could stand it, since I'd never had obscenely long hair before. I figured, once I got tired of it I'd chop it off and give it to someone who wanted it more than I.

I'm sending it to the Angel Hair for Kids project, since they are based in Canada. I hope they can use it despite my frazzled ends!
Posted by Leah at 2:08 am No comments:

I've tried to come up with a convincing new blog layout a few times in the last few weeks with little success. Today I found a combination of subtle changes and photos that I like, so here it is.

Yes, I am aware of the irony that one claiming not to be a perfectionist would take so long to come up with a new colour scheme and blog title. Shh. I'm allowed a little hypocrisy on my own blog, right? The truth is, this is exactly the attitude I was aiming to represent with the new identification - I try, but generally I'll only do and redo things so many times (not many) before I get fed up and settle with what I have. I find myself saying Good Enough - sometimes exasperated, but more often satisfied.

The banner is comprised of some photos I took in a park in Modena in April.
Posted by Leah at 4:28 am No comments:

I left for Italy after the snow had melted, but before green was truly pervasive. I was only gone for ten days, yet I returned to see spring blooming well underway. It cheered me up. Perhaps this is stereotypically female of me, but I do love flowers. I'm fickle, though; every new batch that pokes up strikes me as my favourite until it is replaced by the next crop.

Daffodils are usually the first. Tulips compete with them for attention. Now the lawn is full of violets, dandelions, and forget-me-nots. Lilacs are beginning to bloom. The other day it had rained and everything smelled good, even in the street, and it made me feel all cliche and sentimental. Ah, spring! Even my obstinate disdain falters when confronted with pretty living things. Heh.

Violets have always been a favourite of mine - according to someone they are my "birth flower" (February), and I like deep purples. I have never taken a satisfactory photo of violets, though. I can't seem to capture their colour at the same time as their texture. My macro shots are largely unscientific and involve much squatting, kneeling, hovering, and wildly aiming - I'm sure my technique could use some improvement.

Right now the forget-me-nots are stealing my heart.

I didn't expect to go yarn shopping in Bologna. We went for the day to climb a tall tower, drink espresso, eat gelato, ogle statuary, and generally be tourists. I'm not much of a yarn-tourist, though; I did think it would be neat to find Italian yarn in Italy, and I wrote down some yarn shop addresses in Milan, but we never got to them.

But while exploring narrow streets in and around the university, where so many of the Renaissance men I encountered in undergrad went to study law before becoming poets instead, we found a yarn shop totally by accident. 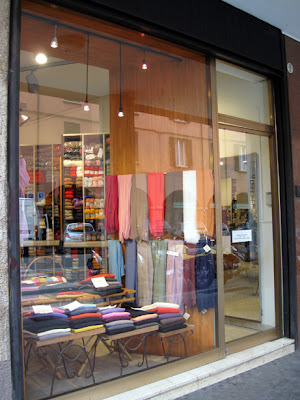 I don't know what it is called, nor can I remember exactly where it was, unfortunately. Anyone out there know Bologna and its yarn shops well? Anyway, it seemed to sell both yarn and clothing, but it had massive amounts of Filatura di Crosa - walls of Zara in many different colours. The yarn was arranged by colour, rather than weight or brand, so that was interesting. I picked up a skein of what I thought was laceweight, thinking that I'd tackle one of my 101 in 1001 goals: Make a lace shawl. My boyfriend bought it for me as a present (aw).

However, Ravelry informs me that Filatura di Crosa Centolavaggi is in fact cobweb. This terrifies me more than even laceweight. My judgment of yarn weights in hand isn't very good sometimes, and I'm such a lace novice that I haven't really handled much laceweight. The whole transaction was quick and exciting without much consideration or thought, and we were on our way... 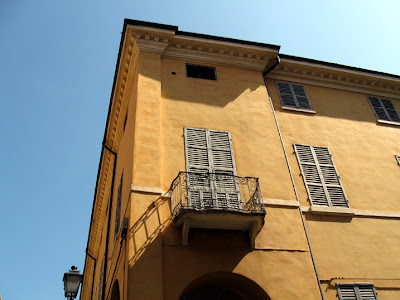 I got back from my adventure in Italy nearly a week ago, started a job the next day, and spent the time between now and then slogging dutifully through my copious photos, trying to get them ready for the internet's scrutiny... 4GB memory card is a licence to find every single thing utterly enchanting and photo-worthy. I'm glad I caught some of the bright colour in pictures, although there were plenty of rainy days.

Windows and balconies caught my eye this time, though like a typical North American I was very taken with narrow streets, cobblestones, churches and generally old things. Despite myself I didn't do much communing with dead Romans.

But I did knit lots on trains and in parks.

Needless to say, I had a great time. Ten days felt like much longer and still much too short. Being less long-distance with my boyfriend for a short time was refreshing and rejuvenating, but now I'm ready for him to visit me in September!

Oh, and even though I'm crossing off #53 (Visit Italy), I'm definitely going back to spend a week in Florence. Some day.
Posted by Leah at 12:53 am No comments: