A tale of two swap parcels

Nearly every year I participate in a swap with some lovely Ravelry friends. A group of volunteers pairs people up secretly so that each person knows who they are sending to but not who is sending to them. I always have a lot of fun finding gifts to send to my swap partner, usually including yarn and tasty treats. Last summer's swap turned out a bit differently than usual for hilarious reasons and I have to share the story with you, albeit belatedly.

I sent off my parcel and waited eagerly to receive one, but it was slow to arrive. That in itself wasn't a surprise since most of the swappers are in the USA - I figured mine would be coming from overseas. When the designated opening day came and went with no parcel I started to get worried that it was lost or stolen. Or held up at customs anyway. I went on holiday and hoped to return to an exciting parcel... But there was nothing. I resigned myself.

Then, the fantastic swap-runners came up with a replacement parcel for me! It contained many gorgeous things including yarn, fabric, and a pretty notebook with a teal theme. Plus a cute baby top for the bean! I love teal and I was so touched by their generosity. 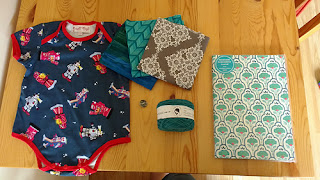 I moved on with my life until a few weeks later, about 3 months after it had been sent, I received my original parcel! We'd been joking that a blind donkey had it... Seems that wasn't far off. 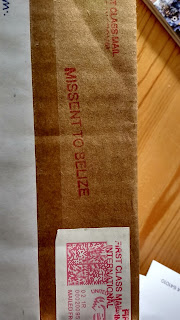 Who knows why it went to Belize before coming to Scotland... But I am so glad it got here eventually. Wish it could have sent me postcards on its travels. 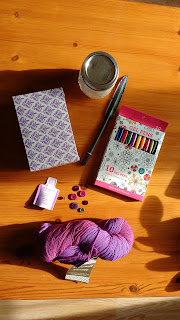 I think I will sit out on the swap next time since I've ended up with more than my fair share of lovely gifts. I'd like to pay it forward, though - if they need a swap angel next time, I'm there!