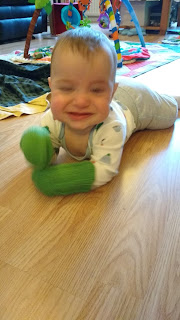 An update of sorts. Since we last spoke, I have been busy! Mostly busy chasing The Bean around our still-not-baby-proof flat trying to prevent him from destroying himself/everything else. He stopped napping in his bed a few months ago, and after some wringing of hands and gnashing of teeth on my part, I have basically given up on that for now - so I do actually get some knitting done when he snoozes in my lap. The picture above is the only one I managed to get of the mittens I knit for him - we lost one soon after, so now he wears socks I made from the same yarn on his hands. (Don't have a pic of those.) 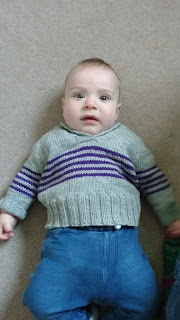 I managed to finish his Hoist the Sails pullover (pattern by Triona Murphy), and it's lovely. Way too warm for my little furnace most of the time here, but it's good as an outer layer on really cold days. (It wasn't too short on him, just riding up in the picture. Next time I would make it longer anyway.) 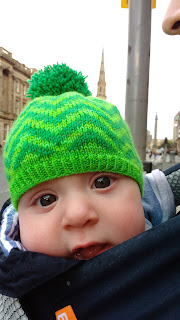 And bonus photo of the zigzag hat I made before he was born - it's getting too small now, so I should try to make another hat to last him the rest of the winter. Maybe a pussy hat.

Just a note: the formatting is all weird because I am posting from my phone as Bean naps on me. I can't be bothered to wrestle with links either... So, sorry.

Hope you are all doing well and navigating the horror of the modern world with fierce determination and pointy sticks in hand. I will be back again with an update on my current projects and queueing and dismay at the world we've built for our children soon!